Start a Wiki
Movin' and Groovin' is a Barney & Friends Episode Video that was released on March 9, 2004. It features two halves that were later split into two episodes. Those episodes are, "Let's Make Music!" and "Movin' Along".

Barney and his friends are movin’ and groovin’ to the beat of the music! As they learn about rhythm and create their own musical instruments, Barney leads the band with a rat-a-tat-tat and a rooty-toot-toot. And they discover there are lots of ways to get a move on as they do the the Dino Dance. Then, after wiggling through a game of Simon says, they’re off to the races. Barney’s friends discover the fun of movement while making beautiful music together! 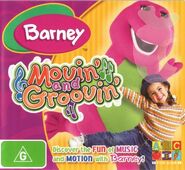 Australian DVD re-release
Add a photo to this gallery

Retrieved from "https://barney.fandom.com/wiki/Movin%27_and_Groovin%27?oldid=225176"
Community content is available under CC-BY-SA unless otherwise noted.