Come on Over to Barney's House

Sam Williamson (Voice Only)
Murray is a CGI animated mouse who was made in Alias Wavefront Maya and he only appears in the video Come on Over to Barney's House.

Murray is Barney's computer mouse. He wears blue glasses and has yellow hair. He also carries around his surf board and wears beach clothes.

As his name implies, Murray loves surfing (web surfing, that is!) When Murray gets plugged in via his tail, he can search for anything on the web.

Murray also has a theme ("Surfin' on the World Wide Web") that first appeared in the same video. 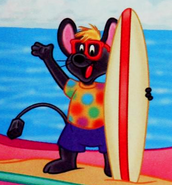 Murray as he appears in the book version of the video. 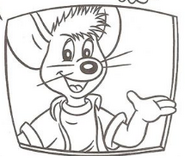 Illustration of Murray from the September 2000 Barney Magazine