Start a Wiki
On Location All Around Town is a video game that was released in 2000 by Hasbro Interactive.

This game is based on the American television show Barney & Friends, starring the titular anthropomorphic purple dinosaur. The players can explore the world with not only Barney, but with BJ and Baby Bop, accessing locales from the show such as the bakery.

It is also possible to play twelve different mini-games and activities witch are complete with lots of magical surprises in store for the player. 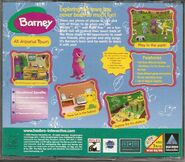 Back of the game cover. 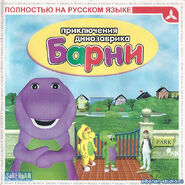 Russian version of the cover.

Russian version of the back cover.
Add a photo to this gallery

Retrieved from "https://barney.fandom.com/wiki/On_Location_All_Around_Town?oldid=218643"
Community content is available under CC-BY-SA unless otherwise noted.