Min arrives and gives Barney, Kathy, and Tosha news that Derek and Tina are coming back for a visit, and they decide to make them a special memory book as a going away gift but Barney has a surprise addition in an envelope he wants to add to the memory book. Meanwhile, a new boy named Kenneth is sad about missing his old friends and is nervous that he won't have new friends until he meets BJ, who gives him advice to help him feel better, and later, he takes Kenneth down to meet Barney, Kathy, Tosha, and Min. After finishing the memory book, Barney hides to add his surprise to the memory book. After Barney hides, Derek and Tina arrive and they are introduced to Kenneth and explains what it's like to be going to a new school. Barney jumps out and he gives the duo their gift and reveals that the addition he included were photographs of scenes from episodes of season two. The group takes one last photograph with Derek and Tina and Barney gives the photo to Kenneth to include in the memory book his new friends had made for him.

This episode was released on VHS on August 8, 1995 as Making New Friends.

Bruce Deck, a Barney & Friends director, on set with the cast of this episode, "On The Move" 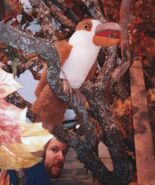 A Barney & Friends crew member with a Kookaburra puppet

BJ and Kenneth are looking around the neighborhood.