Once Upon A Time

Once Upon A Time

Shawn is trying to convince his friends of the magic words: 'once upon a time'. While playing in the playground, by saying the magic words, it begins to rain. However, Barney and the kids quickly realize that Carlos is using a water hose.

Going inside the classroom, Barney's friends are still unconvinced of the magic words. Stella the Storyteller visits; and with some help from Barney, they help teach the kids that the magical effect of 'once upon a time' is the ability to tell wondrous, fantastical stories. Stella tries to unplug her suitcase; when all of a sudden, the case begins unpacking all of her props. Seeing this as an opportunity to show the kids the magic of storytelling, Barney and Stella come up with ways for the group to act out three classic fairy tales: Rumpelstiltskin, Rapunzel, and Goldilocks and the Three Bears. Baby Bop joins the group to help tell the latter two fairy tales.

After telling the three stories, Barney and the kids help Stella pack up her suitcase. The kids leave the school, learning the fun, imaginative process of storytelling. 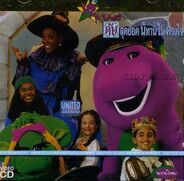 Stephen White with the cast