30 Minutes
Riding In Barney's Car is a Barney & Friends Episode Video that was originally released on September 26, 1995. It later aired on PBS as the episode, "Are We There Yet?"

For more information, see "Are We There Yet?". 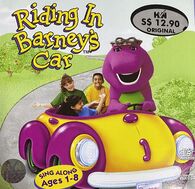