September 26, 2008
The twelfth season of Barney & Friends premiered on the PBS children's block, PBS Kids from September 15-26, 2008, and consisted of ten episodes. This season goes back to the format from the original nine seasons and displays Barney coming to life through a child's imagination, whenever he is needed for something, helping his friends. Some episodes this season use educational themes tailored for toddlers, which is the viewing audience and others continue off the social-emotional curriculum from the previous season, which is outside the target audience.

This season returns to the original full-length thirty minute format that was originally used on the show.[1] This is also the first season since Season 8 as well as the final season to use the Barney Says segment.

This is the first season to not be produced by Connecticut Public Television, the PBS station that brought Barney & Friends on television. Earlier in the year, WNET New York, the producing station for PBS, became the presenting station of Barney & Friends.

This home video, A Super-Dee-Duper Day, features two episodes from this season for content.

This was the final season to feature Jeff Ayers as Baby Bop's costume performer.

The entirety of this season became available to stream on Amazon Prime Video on July 29, 2016.

In 2021, this season became available to stream on many different streaming services, including The Roku Channel, XUMO, FilmRise Streaming Network, Peacock and due to a content deal between streaming service Tubi and 9 Story Media Group, the entirety of this season also became available to stream on Tubi on April 9, 2021.[2][3][4] 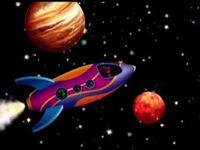