Media
Wikipedia has an article related to:
Sheryl Leach

Sheryl Lyna Stamps-Leach (born December 31, 1952 in Athens, Texas)[1] is best known as the creator of the Barney franchise, having involvement and producing the video series, Barney & The Backyard Gang, and its successor, Barney & Friends, alongside co-creators, Kathy Parker and Dennis DeShazer.

In Fall 1987, Leach was stuck in a traffic jam thinking about the lack of videos that held the attention of her two-year-old son, Patrick.[4] At this time, the only preschool aged programs around were Sesame Street and Mister Rogers' Neighborhood, however, they appealed to a larger age range, rather than strictly toddlers. At the time, the only thing that could hold Patrick’s attention was a “Wee Sing” video.[5] This prompted Sheryl Leach to develop a show herself. Her initial thought was the notice of children carrying snugly security objects, such as blankets and teddy bears. Sheryl Leach thought the idea of a talking blanket and teddy bear interacting with children were a neat idea, however, the blanket concept was too hard to pull off. The bear concept was eventually scrapped due to her son having an interest in dinosaurs after visiting a Science Place exhibit.

Sheryl Leach proposed a preschool video series, which eventually would be Barney & The Backyard Gang, to DLM, Inc (Developmental Learning Materials). At the time Sheryl Leach was working at DLM, Inc. as a writer. The board she proposed to turned her down. Owner of DLM, Inc., Richard C. Leach, who was Sheryl's father-in-law, agreed to back her with the project with $700,000 of his own money. Leach's idea was brought to production at The Lyons Group, in which she was the president of the company[4] from 1988-1995.

Leach then brought together a team who created a series of home videos called Barney & The Backyard Gang. The videos were sold directly to the public.

Later, in 1991, Connecticut Public Television employee Larry Rifkin rented a Barney video for his daughter. He liked the concept, so he spoke with Leach and other creators about putting Barney on television. In October of that year, production began on the new TV show, titled Barney & Friends, and in April 1992, it first aired on PBS. Leach was an executive producer of the series until 1998, leaving co-creator Dennis DeShazer as executive producer until the HIT Entertainment acquisition. Leach made a brief return in 2001 as she was tapped to consult with the crew about the changes for season seven.[6] Leach became a shareholder at HIT Entertainment in which she held 35.5% of HIT shares alongside others.[7][8]

Following Leach's time on Barney & Friends, her name continued to be in the credits of videos as the "Founder/Creator".

Leach has received numerous awards and honors for her achievements with Barney. Leach was named "Entrepreneur of the Year" by the CNBC cable network, has been honored with a National Freedoms Foundation award and received a national humanitarian award from B+nai B+rith International - the first woman to receive this prestigious award since Eleanor Roosevelt. Her speaking credits include the National Press Club in Washington, D.C., The Detroit Economic Club and the national conference of American Women in Economic Development. She has been a featured guest on many talk shows including The Today Show, Good Morning America, CBS This Morning, The Home Show and Donahue.[9]

While working as a writer at DLM Inc, Leach met James "Jim" Leach. With a year, they dated and got married when she was thirty-years-old. Together, the two of them had a son named Patrick Leach. In Fall 1987, Leach was stuck in a traffic jam thinking about the lack of videos that held the attention of her then two-year-old son, Patrick.[4] This thought would lead to the creation of Barney & Friends and the preceding Barney & The Backyard Gang videos.

Barney and Sheryl Leach in the school set of Barney & Friends.

Barney and Sheryl Leach outside.

1995 photo of Sheryl Leach and the dinosaurs.

Barney and Sheryl Leach on the set of Barney's Great Adventure. 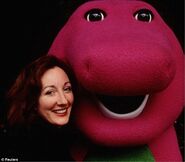 A closeup picture of Barney and Sheryl Leach.

Barney and Sheryl Leach makes an appearance on CBS News!