Sing And Dance With Barney

Sing And Dance With Barney

54 Minutes
Sing And Dance With Barney is a Barney Home Video, celebrating Barney's 10th Anniversary that was released on January 12, 1999.

The kids get a mysterious invitation for a party and later find out it was from Barney. He plans a party for all of his friends. The group begins going on magical journeys, beginning with an adventure to Grandpa's Farm. When they return, some of Barney's old friends, Michael, Kathy, and Tosha, show up and recall some memories. Linda, Danny and Kim join them and the group goes camping in the forest. Coming back from that trip, Jason and Min arrive as a surprise for Barney. The last trip of the day is to Storybook Land, a magical place where fairy tales become reality (complete with a castle). Back in the treehouse, Barney tells everyone (including the viewer) that they're special and they tell him the same and that he can count on them. 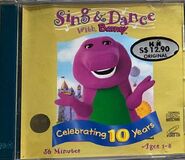 A group photo of the cast

Another group photo of the cast

The cast in a dressing room

Sing And Dance With Barney Trailer

Barney the Dinosaur Outtakes - Come on, Bingo! (Sing and Dance with Barney - VHS)