Sprout (formerly PBS Kids Sprout) was an independent American digital cable and satellite television network that was originally spun-off from the children's programming block, PBS Kids. During its final years, it was solely owned by the NBCUniversal Cable subsidiary of NBCUniversal which is owned by Comcast. The channel launched on September 26, 2005 and primarily targeted preschoolers. Its lineup featured a mix of originally-produced programming, along with acquired programming.

Apax Partners, the former owners of HIT Entertainment, sold their share of the network in 2013. Mattel, the current owners of HIT Entertainment, did not take said share when it bought the company a year earlier. Sesame Workshop and PBS followed suit, giving NBC Universal full control of the network. The channel eventually was rebranded to Universal Kids as a result of Comcast gaining full control.

The origins of the channel emerged in early 2004 during an executive meeting in New York City. Joyce D. Slocum, who worked for HIT Entertainment at the time, and another company executive were discussing the difficulty for producers like HIT to find distribution platforms when companies such as Disney and Nickelodeon did both and had incentives to air their own shows. It was concluded that if there were channels that stuck to one topic, such as golf, then there should be a market for children's programming. Soon HIT executives approached PBS, which had been considering the same idea. At this time, PBS had an unsuccessful PBS Kids channel. Both HIT and PBS soon approached Comcast about starting a 24/7 children's channel with Sesame Workshop eventually joining. Negotiations for the channel took more than a year. Among the sticking points was whether to air commercials. Because PBS is a nonprofit organization that is also noncommercial, it airs only short spots identifying program underwriters before and after shows. Comcast, on the other hand, is a for-profit company that sells ads. The parties eventually compromised: allow commercials to bookend but not interrupt shows, and the advertisements are required to be targeted at parents, not children.[4] The announcement of the channel and partnerships were made on October 20, 2004.[5]

When the (original) PBS Kids channel was shutdown, some PBS affiliated stations helped to promote the newly announced PBS Kids Sprout, with some affiliates replacing the PBS Kids channel for Sprout later down the line. A launch party for PBS Kids Sprout was held at Yerba Buena Gardens in San Francisco, California on April 4, 2005.[6] During this same month, Sprout launched PBS KIDS Sprout On Demand, a video-on-demand (VOD) service which debuted on Comcast ahead of the twenty-four hour digital cable channel that would launch in the fall.[7] The digital cable channel was intially scheduled to release on September 1, 2005, but was delayed to September 26, 2005.

Comcast acquired a 51% majority stake of the NBCUniversal in January 2011 (and would assume full ownership of the company on March 19, 2013). As a result, Comcast's interest in Sprout was turned over to NBCUniversal. When Apax Partners sold HIT Entertainment to Mattel on October 24, 2011, HIT's ownership interest in Sprout was not included in the deal and was retained by Apax Partners.[8] On November 13, 2013, NBCUniversal acquired Apax and PBS's shares in the network, giving the company full ownership of the network, with its operations being merged into its NBCUniversal Cable subsidiary.[9] As a result, the "PBS Kids" branding was dropped from the network's name, renaming it as Sprout.[10] The channel eventually moved its headquarters from Philadelphia, Pennsylvania to 30 Rockefeller Plaza in Manhattan, New York City, NY.

On Sprout's 10th anniversary on September 26, 2015, the network received a rebrand and shifted focus towards original shows, such as Nina's World, and removed older acquired shows such as Barney & Friends. Only two shows that have been on the channel since its launch, Caillou and The Berenstain Bears, remained on the network. Caillou continued to air on the network until March 31, 2019, while The Berenstain Bears continued to air on the network until the channel rebranded into Universal Kids. Under NBCUniversal ownership, the channel began to shift away from its original focus on library content, and invested more heavily in original programming to displace older, licensed content to better compete with fellow preschool-oriented pay-TV networks Disney Junior (part of Disney-ABC) and Nick Jr. (part of ViacomCBS), which in turn was also partially made by Sesame Workshop. Under NBCUniversal, programs seen on the network such as The Chica Show earned increased visibility airing on NBC as part of the NBC Kids block.[11][12]

On May 1, 2017, NBCUniversal announced that Sprout would rebrand as Universal Kids on September 9, 2017. With the rebranding, the network revamped its evening and primetime programming to aim preteens aged 8–12. Universal Kids continues to broadcast preschool programming, initially retaining the Sprout brand, occupying fifteen hours per-day of programming from 3:00 a.m. to 6:00 p.m. LT. Network president Deirdre Brennan claimed that Universal Kids' new programming would be renowned from its competitors, stating that "we're offering something to 2 to 12 year olds that has a slightly different purpose — widening their eyes, opening their minds and celebrating many aspects of being a kid. We have great [shows] for the preschoolers, which is important, but we needed to grow up with the rest of the family." Universal Kids will initially focus on acquired programs and unscripted series (such as Top Chef Junior, a spin-off of the Bravo reality franchise Top Chef), with plans for scripted original programming in the future. NBCUniversal intended to make "significant" investments in original content for Universal Kids over the next three years. The launch lineup included a large number of international acquisitions, particularly from the U.K., Australia, and Canada; Brennan acknowledged that since youth audiences had become "globally aware", the network wanted to showcase foreign series that had not yet aired in the United States.

The programming blocks below were all shown under the Sprout banner.

Barney & Friends was one of the initial shows on Sprout when it first aired, along with favorites like Sesame Street and Bob the Builder. The show lasted on the channel until September 2015, making it one of Sprout's longest lasting programs.

Barney promoting Sprout at a convention

The Sunny Side Up Show

Barney alongside Nina from The Goodnight Show and Chica from The Sunny Side Up Show, in the Sunshine Barn. 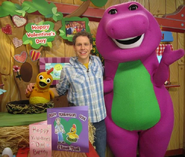 Behind the scenes shot of Barney & the host

Barney & Friends on the site Sproutonline.com

Barney & Friends on the site Sproutonline.com 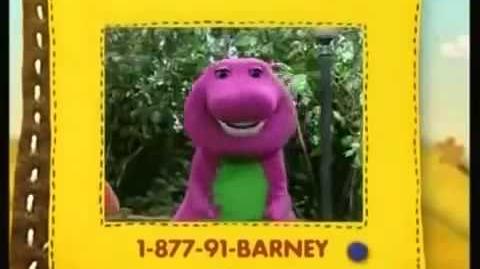 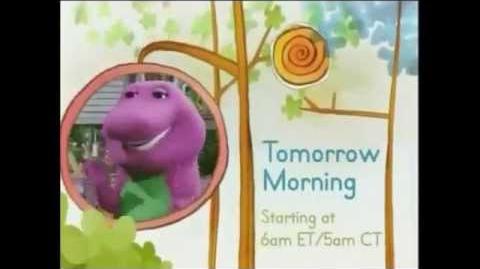 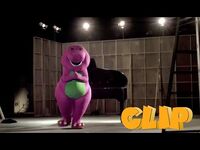