Talking Barney was a doll created by Greg Hyman and distributed by Playskool. It was released in 1993, and became one of the biggest-selling toys during the holiday season.

At least four different versions of the plush were produced throughout Playskool's tenure manufacturing Barney toys.

Original version of the doll released in 1993

Version 1.5 Release Unknown Year (The Eyes are from original version while body is from a later version) 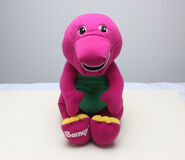 A version of the doll exclusive to Blockbuster, released in 1998 to promote Barney's Great Adventure.
Add a photo to this gallery
Retrieved from "https://barney.fandom.com/wiki/Talking_Barney?oldid=213503"
Community content is available under CC-BY-SA unless otherwise noted.