The Land of Make-Believe (video)

The Land of Make-Believe

55 Minutes
The Land of Make-Believe is a Barney Home Video that was released on August 30, 2005.

There were two kids that were reading a fairy tale storybook about a princess living in the land of Make-Believe. The last pages of the story book contained empty pages. Then suddenly, she comes to life, due to a mysterious machine. She was puzzled and didn't know what to do. Then Barney and the two friends decided to help her find her way home. They took a city bus to get to the public library.

Once they landed in the land of Make-Believe, the two children gazed in wonder. The princess points out where is her castle. They follow in her lead. They met a mermaid who had three dolphins. The princess and the two kids played with the dolphin. They had a great time. Once they were done, they were supposed to go to a house under a tree stump. Luckily, Baby Bop pointed out where it was. The house under the tree stump turns out to be a wizard living. The wizard gave BJ a cracker to their next clue.

Barney and his friends went back home and said farewell to everybody. The princess told them they would keep and eye on them with the machine. The two kids looked through the book and saw the empty pages filled. The fairy tale story then came to a happy ending. Barney then turned back into a doll and the two kids went to return the book to the public library.

Stories: "The Land of Make-Believe" 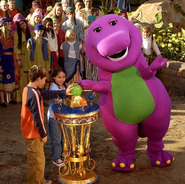 Filming shot of Barney with the kids 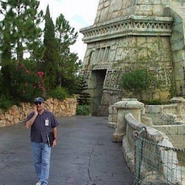 Barney, Baby Bop, and the crew