The T Game is a Barney song that only appeared in Now I Know My ABCs. It is a variation to the song, The N Game.

Can you think of word that starts with a 'T'
that rhymes with the word I say?
If you know a few words beginning with 'T',
then I think we're ready to play.

Can you think of other words that start with a 'T'
that rhyme with the word I say.
If you know some more words beginning with 'T',
then let's continue to play.

Well, that was fun and you sure named a lot
of words that began with 'T'.
If we're ever just looking for something to do,
we should play this game again. 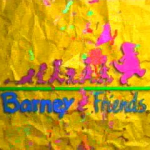