Three Wishes is the second video in the Barney & the Backyard Gang series, originally released on January 2, 1989.

The Backyard Gang are bored on a Saturday with nothing to do. That is, until they use their imaginations to bring Barney to life. When they tell Barney their problem, he acts like a genie and gives them three wishes to go anywhere they would want to go in their imagination. Using their imaginations, they go to places like a fun park, the Moon in outer space, and even a fun-filled animal farm. But when Barney leaves, the kids learn from Mom that "friends are forever, whenever they're make-believe".

Final Rerelease (1992)
Add a photo to this gallery 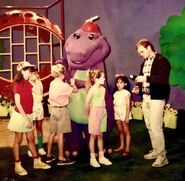 Barney & the cast
Add a photo to this gallery

Retrieved from "https://barney.fandom.com/wiki/Three_Wishes?oldid=223740"
Community content is available under CC-BY-SA unless otherwise noted.