The Barney Vehicles were a line of toy cars originally released by Child Dimension in 1992.

Around 1997-1998, when The Lyons Group was rebranded as Lyrick Studios, Playskool took over the manufacture and distribution of the toys and rebranded the series as Die-Cast Vehicles. Similar to Hasbro and Playskool's line of Sesame Street cars, these cars were made of metal with a plastic character head sticking out of the center, including Barney, Baby Bop, and later BJ. In addition, many of these cars used the same molds as the Sesame Street vehicles. 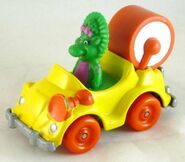 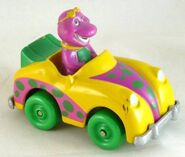 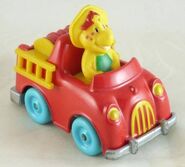 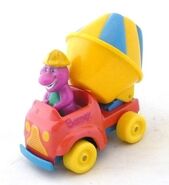 Barney's Cement Mixer (update)
Add a photo to this gallery
Retrieved from "https://barney.fandom.com/wiki/Toy_Barney_Vehicles?oldid=201951"
Community content is available under CC-BY-SA unless otherwise noted.