Universal is also home to many other attractions in film, including The Wizarding World of Harry Potter, Shrek 4-D, The Blue Man Group, Jurrasic Park, Despicable Me: Minion Mayhem, The Simpsons Ride, Transformers: The Ride, and many more! 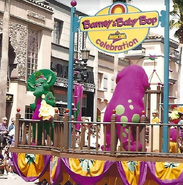 Barney and Baby Bop on a parade float celebrating the opening of the show at Universal.

Barney on the float during the celebration.
Add a photo to this gallery

Retrieved from "https://barney.fandom.com/wiki/Universal_Orlando_Resort?oldid=212148"
Community content is available under CC-BY-SA unless otherwise noted.