Walk Around The Block With Barney

Walk Around The Block With Barney

Not in North America

49 Minutes
Walk Around The Block With Barney is a 1999 direct-to-video Barney Home Video that was released on May 4, 1999.

The video starts with Curtis and Hannah looking at the bulletin board and they realize that the theme is about neighborhoods. Then, Barney comes to life and he sings "Being Together". Later, Ashley and Stephen join them in singing the song, and then, a woman named Debra just visited the school for a delivery. Later, she expresses that her customers wouldn't be happy as they were as the other boxes had their addresses fell off. Soon, Barney tells her that he and the kids could help her bring the boxes to a specific place by reading what is inside. Soon, Debra gives them the packages without addresses and then she leaves to go back to work. BJ comes in and asks if the boxes were presents; then Barney refuses. Soon, Baby Bop comes with her wagon, and then, Barney and the kids put the boxes into Baby Bop's wagon. They discuss about road safety by singing "Walk Across the Street".

As Barney and the kids begin to deliver the boxes to the neighborhood; Baby Bop and BJ choose to stay in the treehouse until Debra comes back for a surprise. The first box that they delivered consisted of baking materials and it was brought to Mr. Cannoli's Bakery, then, they brought a box of a brush, mirror, and a shampoo to Miss Bouffant's Barber Shop. While Barney and the kids deliver packages consisting of tickets and books to the Movie Theater and Library respectively, Baby Bop asks BJ if she could talk on the treehouse telephone, but then BJ knows that there is a telephone in the lookout. Later, Miss Marigold's Flower Shop comes over to the neighborhood and Barney and the kids give her the package of flowers. Then, they bring a box of menus to the PB&J Cafe, and then, they eat kinds of bread, and finally, they brought a box of fruits to Mr. Green's Grocery Store. Soon, Barney and the kids return to the playground and Debra asks them if they delivered all the packages; then BJ and Baby Bop finally get to ask Debra where could the surprise be; and it was at the school entrance. Debra reveals that these were leftover boxes from the delivery center where she worked and she tells the kids that it is theirs to keep. Because Baby Bop wanted to visit the neighborhood and the kids wanted to play with the empty boxes at the same time, Barney tells them that they need a little imagination; so BJ and the kids wear a tae kwon do uniform while making their own neighborhood as they sing "The Land of Make-Believe". The kids give BJ and Baby Bop a bag of cookies and a bouquet of flowers and then they leave; and the kids have fun playing in their own neighborhood as the video ends.

Barney, Curtis, and Hannah meet with each other.

Mr. Novak walks with his dog.

Barney and the kids have fun walking around the neighborhood. 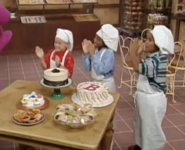 The kids have fun playing with their hair.

Barney and the kids sing a beautiful song about flowers.

BJ and the kids wear a smock as they create their make-believe neighborhood using the empty boxes from Debra's delivery center.

The kids at the end of the video

Walk Around The Block With Barney Trailer